By Admin August 26, 2018
Philippine Airlines followed suit with a major competitor and announces their own version of a 199 Pesos seat sale promo. Yes, for as low as 199 pesos you can fly to selected domestic and international destinations on this travel period: September 16 , 2018 to March 31, 2019. The promo poster screenshot is shown below taken from PAL's website. 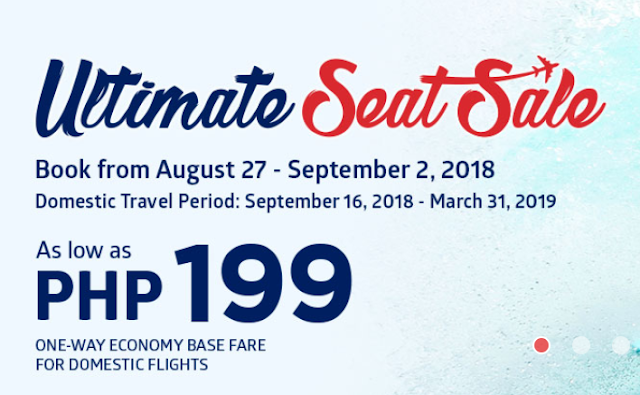 The promo is up until September 2 or until seats under this promo are all taken. So, basically you have a week to book. But of course, promo fares on "good dates" like weekends or holidays are easily sold out. So there's a reasonable degree of urgency on this matter. Bu the way, you can book your tickets online at www.philippineairlines.com or at any PAL ticketing office. Since they're close tonight, it's best to book online NOW.


For a complete detailed list of how much per destination and specific travel dates, you can visit this page.

The fare describe here is just the base fare. It means it's exclusive of other fees such as terminal fees, taxes and other administrative charges. More likely these will amount to around 900 pesos on domestic and much higher for international flights. I don't have the exact number right now but just expect to pay more than what is shown in the promo poster.

I Would Recommend Autumn in South Korea

I would say it's the best season: Fall or Autumn. Dry cool weather and leaves changing colours. The last bloom of nature before it finally rests and hibernate for winter. Yes, autumnal views are the best! I've tried autumn twice, almost thrice and I miss it so much. I said almost thrice because I had a trip to Korea late September 2016 but I realised I was too early. Autumn season didn't came until late October. I got some autumnal feels in the mountainous sites I visited though but it never came close to the one I experienced in the United States. I stayed there the in last leg of summer until winter which means I got to see the full autumn in all its glory.

Korea and Japan are among the top spots in Asia where you can get to see this amazing phenomenon. This promo provides a good opportunity to experience one, even just once in a lifetime.