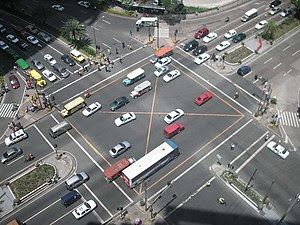 Ayala and Buendia Ave. Image via Wikipedia
At least 4 people were killed and 14 were injured after an explosion inside a bus. The incident occurred around 2PM today inside an air-conditioned bus travelling north on the EDSA-Buendia, Makati City area. Initial unconfirmed reports points to an explosive placed in the vicinity of the middle of the bus as the cause of the explosion. However, the nature of the explosive is yet to be determined. Those injured were immediately sent to the nearby hospitals in Makati and Taguig (Ospital ng Makati and St. Luke's Medical Center).

The name of the bus line is Newman Goldliner with a plate number TXJ-710. The bus and the surrounding areas are now fully secured as the authorities continues their investigations. According to MMDA, EDSA north-bound lane will be closed indefinitely from Ayala to Buendia. Affected vehicles may take McKinley or Buendia f/o or C5 or SLEX.