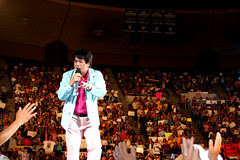 Willie Revillame. Image by ~C4Chaos via Flickr
The Department of Social Welfare and Development (DSWD) issued a counter-statement against Willie Revillame and his lawyers regarding the accusation of the latter that he has been a victim of politics regarding the issue of child abuse. In the press release published at the official website of DSWD, the government agency defended their involvement in the case. They said that after the video of Jan-jan was posted on YouTube they received "more than 100 email messages from concerned individuals, mothers, child advocacy/legal groups, and even OFWs from Hongkong and the USA" rousing them to act over the issue.

The department also appealed to the public saying that "there is no partisan politics angle or any hidden agenda as Mr. Revillame and his lawyers alleged." They also made it clear that their primary concern is the welfare of Jan-jan and his family. They also added that Jan-jan's case was "one glaring example of the need of society, including parents, to understand the different forms of child abuse."
Willie Revillame was once again put into the limelight after the incident that happened on his show Willing Willie aired live on TV 5 where a six-year-old boy named Jan-Jan Estrada was made to repeatedly perform dance moves usually done by adult dancers. Copies of the episode was quickly posted on YouTube and met online rage from different concerned citizens and organizations. MTRCB and DSWD quickly acted and investigated the matter immdiately.
The issue reached its climax when the majority of the show's advertisers including Jollibee's Mang Inasal, Procter and Gamble, and Unilever pulled out their TV commercials because of the issue. Revillame defended himself and in his speech on the last episode of the show, he lambasted his critics including several TV and movie personalities and government agencies.
See original press release of DSWD.

By Admin January 11, 2018
It's a brand new year for everyone, including local scammers. And despite all the efforts by PLDT and Globe Telecom to curb text message scammers, from time to time, they still creep out and show up in our inboxes. And as hard to believe as the messages of winning some great amounts of money is the fact that there are still people who believe them. I personally know someone and that scam text message triggered events that turn her life upside down. So my point is, we still need to be careful regarding these scam messages. The danger is real! So without further ado, here's the scam message I received a few days ago. On Sunday, January 7, 2018 at exactly 3:33PM (PH time), I received this message from a certain Atty. Jhon Acosta with phone number 09552962911 Congratulations! Ursim# Hadwon PHP850,000 From(GMA KAPUSO FOUNDATION) To Claim Send Ur (NAME/ADD/AGE) &Call Me Now Im Atty;JHON ACOSTA DTI#0391s2018 Thankyou,  Do Not Ever Reply Obviously, this is a
118 comments
Read more