By Admin November 12, 2017
Just a few weeks before the much hyped iPhone X arrives in the country, we can still find the item in Lazada Philippines being sold discounted from its original price of ~100,000 Pesos. The lowest that I currently see in the online retailer website is 69900 Pesos, about 28000 pesos less when it first appeared as part of the grey market. 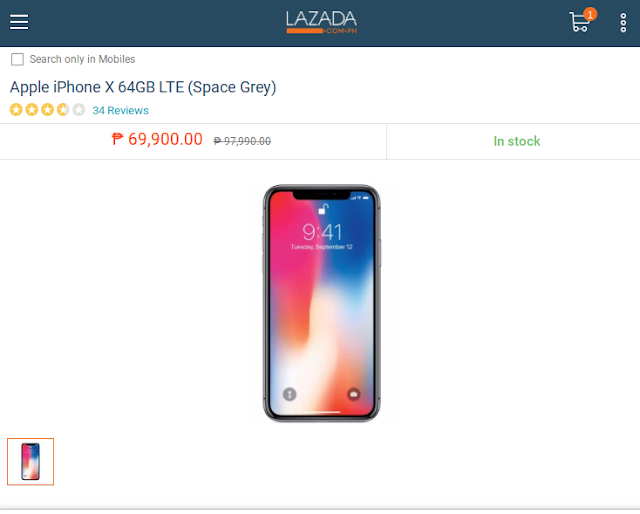 Newly launched iPhones doesn't reach the country at the same time as the United States and other wealthier countries. Before, it can take about two or more months. I can even remember the time when Globe Telecom owns the exclusive right to distribute iPhones in the country but only after several months since its release. To counter this delay, some are willing to go to the grey market which can jack up the price to 100000 Pesos or more for the immediate availability.

The iPhone X was announced last September 12 in an Apple Event in the United States. It officially goes on sale November 3. Earlier this week, Apple PH website indicated it's release on December 1. Later on, Globe Telecom confirmed the availability of the popular smartphone but without giving much details to the plans to which it will be tied up.

So for those who can't wait until December 1, you can still get the iPhone X in Lazada PH.

The official price of the all-screen iPhone X is yet to be announced but as discussed in my previous articles, the $999 US price tag for the 64GB model may well translate to 55000 to 60000 Pesos local price tag. The additional cost goes to the importation taxes imposed by the government and others.

So the question is, if you want to this phone, are you willing to wait a few weeks more or will you buy it now. Let us know your opinion by leaving a comment below.