Angels and Demons-Movie Synopsis and Review 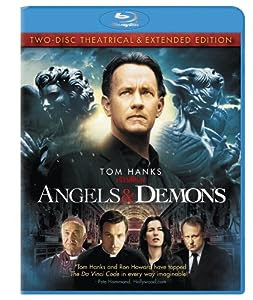 Cover of Angels & Demons [Blu-ray]
Last Tuesday, I decided to watch the movie Angels and Demons in Ayala Cinema here in Cebu. It was directed by Ron Howard (The Da Vinci Code, 2006), and was based on the best-selling novel by Dan Brown bearing the same title. It was another Robert Langdon adventure as a world famous symbologist and Harvard professor on arts.


The movie attracted many viewers. Even though I watched the last full show on 9:10PM, to my surprise, almost all the upper seats are still occupied. According to the Columbia Pictures, the movie earned $152 million worldwide, including the $48 million on US and Canada. It topped the box office on its first week of pushing Star Trek to No.2.

The Story
Robert Langdon was called by Vatican to help them find the four kidnapped cardinals referred to as the Preferitti, the favorites among the cardinals to replace the recently died Pope. The kidnappers introduced themselves as the Illuminati, an ancient brotherhood of scientists and mathematicians who seek enlightenment through science but enraged the Church with their discoveries that contradicts the Church’s teachings. The members of the brotherhood was arrested, tortured and branded on their chest to purge their sins. They promised to amass enough power and resurface and bring the Church to destruction.

Adding to the complexity to the situation, a physicist was murdered and the newly discovered power source known as antimatter was stolen from CERN and was planted somewhere in Vatican. With only six hours before its detonation, Robert Langdon should find the location of the antimatter and rescue the cardinals to save the Vatican and the Conclave.
Robert joined Vittoria, the colleague of the murdered physicist, Camerlengo Patrick McKenna, the Pope’s Chamberlain and adopted son, Captain Richter and Olivetti of the Vatican Police and the Vatican Swiss Guards. Together they will solve the greatest threat in Vatican security and save the currently held Papal Conclave.

Robert discerned the location of the bomb and the cardinals through the poem written by Galileo, the supposed founder of the Illuminati brotherhood. He and others followed the Path of Illumination which eventually led them to the Church of Illumination where the Cardinals were held captives. As they go through the Altars of Science, the landmarks of the Path, the each cardinal was killed every hour on each altar representing the four elements, Earth, Air, Fire and Water.
They ultimately found the Altars of Science and the cardinals, three of them died. As they headed towards the Church of Illumination, they discovered the truth behind all of this. It was the Camerlengo who masterminded the killing of the Pope and the Cardinals by paying a terrorist and by deceiving everyone that the Illuminati have really resurfaced. In the end, he committed suicide by burning himself.

Verdict
Judging the movie as to good or bad is a tough one for me. I already read the book before watching the movie, so it evaporated all the surprises that make it exciting. I understand that it’s really hard to make a movie as exciting as the book because it’s easy to make suspense on the reader’s rather than the watchers. I was also a bit disappointed on some of the revisions on the movie like the character names and roles. I will be posting a separate article about the substantial differences between the movie and the book.