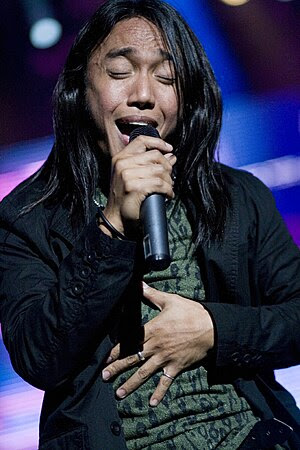 Image via Wikipedia
World renowned rock band Journey made a big come back last year when they introduced their newest member and lead vocalist in the person of Arnel Pineda, a Filipino singer.

Pineda’s voice was strangely similar to the Journey’s former lead singer, the legendary Steve Perry. That may have been the very reason why they got him. According to Neal Schon, Journey’s lead guitar, Pineda fits exactly to the band’s need for vigor and energy. Schon, who discovered Pineda in You Tube, was startled to see him singing high-note songs of Air Supply, Survivor, Heart and Journey. During that time, Journey is searching for a new vocalist, so without hesitations, he quickly find ways to contact the singer to invite him for an audition.

When Pineda received the email, he quickly discarded it as a hoax, but because of a long time friend who keeps persuading him, he finally answered the email. Only a few minutes after, he received the phone call that shook his singing career-an invitation for an audition in the US.

The audition, according to Pineda was “nerve wracking”. For Pineda, even just the invitation was a dream he never thought would come true. But it did come true, and it was just the start of the greatest journey he ever had on his life. Only few months after the audition, he was formally announced as Journey’s newest lead singer. On February 2008, he performed his first concert with the band during a festival in Viña del Mar, Chile. Crowds were astounded by Pineda’s performance, and critics even called him the reincarnation of Steve Perry.

Quickly after that concert, the band released their first album with Pineda entitled Revelation and after a week, it debuted as No. 5 in the US Billboard Top 200 Album charts. It quickly turned gold just a few days after its release and in October 2008, it reached Platinum. In the months that followed the release, Journey organized a worldwide tour to promote the album. The tours attracted crowds of
expectators, most of them curious about the newest member wanting to see him perform live. The audience was not disappointed, as the videos obviously tell. When Pineda sing classic Journey songs like Faithfully, Don’t Stop Believing, and Separate Ways, the crowds go on screaming in total amazement.

Along with fame and success come controversies. Not all Journey fans liked the idea of having Pineda. Some were disappointed by having an Asian leading the band. For some, it lowered the quality of Journey’s music and even insulted the band’s reputation. They called Pineda as a “Karaoke” singer who pretends to be Perry. Schon defended Pineda by saying that it was an intelligent decision because Journey is not anymore just an American band, but a global band determined to bring the world music at its best.

Journey seems to have found the “fountain of youth” they need to come back. The controversies seem to have positive rather than negative effect for it fuels curiosity which leads to more album sales and crowded concerts. The fact that they have made a roaring comeback was very strong evidence. I hope they continue to provide great music for millions of listeners worldwide. As to Arnel Pineda, keep doing great by singing with Journey and showing your own style to the world.

By Admin January 11, 2018
It's a brand new year for everyone, including local scammers. And despite all the efforts by PLDT and Globe Telecom to curb text message scammers, from time to time, they still creep out and show up in our inboxes. And as hard to believe as the messages of winning some great amounts of money is the fact that there are still people who believe them. I personally know someone and that scam text message triggered events that turn her life upside down. So my point is, we still need to be careful regarding these scam messages. The danger is real! So without further ado, here's the scam message I received a few days ago. On Sunday, January 7, 2018 at exactly 3:33PM (PH time), I received this message from a certain Atty. Jhon Acosta with phone number 09552962911 Congratulations! Ursim# Hadwon PHP850,000 From(GMA KAPUSO FOUNDATION) To Claim Send Ur (NAME/ADD/AGE) &Call Me Now Im Atty;JHON ACOSTA DTI#0391s2018 Thankyou,  Do Not Ever Reply Obviously, this is a
155 comments
Read more