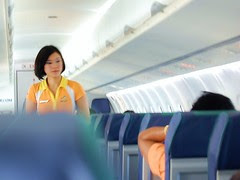 Image by georgeparrilla via Flickr
Although generally, many people were amused by the "Dancing Flight Attendants" number from Cebu Pacific Airlines, there are also those people and groups who don't feel the same. Two of them are the Flight Attendants' and Stewards' Association of the Philippines (FASAP) and the notable women's rights group GABRIELA.

Note: Cebu Pacific's attendants are not part of FASAP.

Both of these groups shows concern of the incident. In a press release statement, FASAP said that they are "deeply perturbed by the recent video spreading in the internet showing dancing flight attendants while performing the safety demonstration of the flight."

They reasoned that it may eventually lead the public into "stereotyping of flight attendants as entertainers" and will surely have a negative and sexist impact in the minds of the public". They even called the activity as "demeaning and undignified".

Does that sound reasonable?

Well, let's define first the term "sexist or sexism". Wikipedia defines this word as "the belief or attitude that one gender or sex is inferior to, less competent, or less valuable than the other."

Based on this definition, is there anything in the dance number that is making the female attendants as "inferior"? And remember, there is also a "male version".

Also, would you agree that the activity was "demeaning and undignified"? Is dancing and entertaining people an undignified act? Well, if you call it that way, then you are mocking the profession of our beloved actors and actresses. And although it's not technically part of an attendant's job, is is bad to incorporate that? Well Cebu Pacific is currently hiring flight attendants, and no dancing skill is required.

Dignity is what you are inside and not how people see in you outside.

That's all my thoughts, how about you?