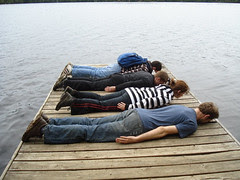 Image by asalga via FlickrTrending on twitter now and in other Social Media tools is the infamous "Anti-Planking Act of 2011". This was actually a law proposed by Quezon City Representative Winston Castelo which aims to penalize the act.

Planking is is an activity consisting of lying face down in an unusual or incongruous location (Wikipedia). This has been one of the fads of protesting and has gained public attention during the transport stike last Monday.

Of course netizens reacted quickly in their ire to the propoed law which many think is overly reactive. What is your opinion regarding the infamous "Anti-Planking Act of 2011"?