Puerto Princesa Underground River is one of the Provisional (Winners) New 7 Wonders of Nature! 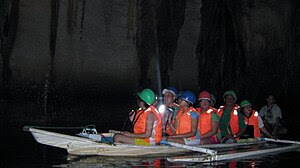 Image via WikipediaThe preliminary result is out for the search for the new 7 Wonders of Nature and our very own Puerto Princesa Underground River (PPUR) is one of them. Other provisional winners are the Amazon, Halong Bay, Iguazu Falls, Komodo Island, Table Mountain and Jeju Island.

Puerto Princesa Underground River is a subterranean flowing body of water located in the island of Palawan. It is a contender of the worlds longest underground river. In 1992, it became a national park managed by the local government of Puerto Princesa.

Results May Change
The New7Wonders Foundation said that the results may change pending the recount and validation of voting resutls. The final results will be announced during the Official Inauguration early next year, 2012.