By Eprel November 05, 2012
I don't really understand the reason behind the Filipino craze about donuts but, yes, most of us love donuts. And speaking of that toroid cake, there's a new craze in the country, J.CO Donuts Philippines. The company J.CO Donuts & Coffee originated from Indonesia in 2005 and is the fastest growing donut chain in South East Asia. It entered the Philippine market just this year. 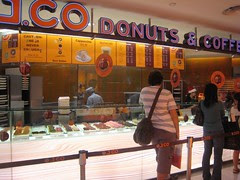 Well, it didn't dethroned Krispy Kreme in sales or revenues but it dethroned it as one of the top "pasalubong" of people from Manila going to the provinces and other cities, at least for the meantime. It used to be the green-red-white box of Krispy Kreme Donuts that you usually see in the airports. Now, it's the mocha-orange box of J.CO donuts. Of course, time will come that the "hype" will subside just like what happened to Go Nuts Donuts and Krispy Kreme when they opened their respective stores in the country. People were crazy at first and then the hype eventually fades.

J.CO Donuts and Coffee stores are located in the following locations:


They are also planning to open stores in these locations.

Long lines of people that are excited to buy the new donuts in town is a usual scene inside J.Co Donuts stores. My friend had to line up for an hour or two just to get one. Most of those lining up were first or second time buyers.

One piece of J.CO Donuts costs 42 pesos. Half dozen costs 230 Pesos. One Dozen costs 350. And two dozens costs 550 Pesos. There are many flavors to choose from - chocolate, blueberry, green tea etc.

Well, we can argue all day long just to find out which one is better but at the end of the day, it all boil s down to preference. For example, Krispy Kreme dough is soft, J.CO is not as soft. Krispy Kreme is super sweet (for me), J.CO is not as sweet (which is just right for me). To find out if you will love it, visit one of their stores and taste it yourself.

Do you want to subscribe to Trip Ko's new articles? Well, you can do either of the following:

4. Make us part of your Google Plus Circle