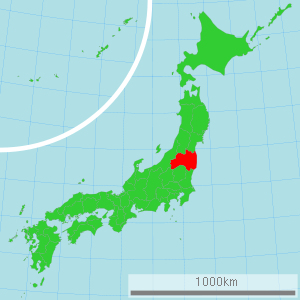 Fukushima, Japan. Image via Wikipedia
The hoax text/SMS about the alleged radioactive fallout from the problematic Fukushima had already reached other Asian countries such as Malaysia, Singapore, India and Hong Kong. The fictitious message warns people in the Philippines and other Asian countries against the radiation that leaked from the problematic nuclear reactors in Fukushima, Japan caused by magnitude 9.0 earthquake that rocked the northern part of the country last March 11, 2011. It advises everyone to stay indoors especially when it rains and to put "betadine", an Iodine based solution to the neck area to protect the thyroid from the radioactive particles.

The text message began to spread in the Philippines early morning of Monday, March 14 after reports of a second explosion from one of the Fukushima reactors. By afternoon, the message became viral and already spread in the internet through Twitter and Facebook.
At approximately 3PM that day, this blog, Blogged Philippines, posted an article entitled: NOT TRUE: BBC News Flash Report: Japan government confirms radiation leak at Fukushima nuke plants. It clarified that the alleged BBC Flash News was not true. The article pointed out that BBC did not have a Flash News of that sort and cited credible sources like the Philippine Nuclear Research Institute (PNRI) and the British Broadcasting Company (BBC) itself. All these sources rejects the possibility of imminent threat to the Philippines and other Asian countries in contrast to what the hoax SMS is claiming.
Similar announcements were issued by the Philippine Government through the Department of Health (DOH), Office of the President, and the Department of Science and Technology (DOST) urging the public not to believe the hoax text message.
Three days after that hoax message caused panic in the Philippines, it started to spread into other Asian countries. One comment from India lamented: " In India, this sms making ppl confuse...most of mobiles receiving this msg....crazy ppl"
Similar cases were reported in Malaysia, Sri Lanka and other Asian countries.