By Admin July 23, 2012
"Coco Water" trends in social network Twitter minutes after President Benigno "Noynoy" Aquino III mentioned the term in his third State of the nation Address (SONA 2012). The term actually refers to the the  edible liquid found inside the coconut commonly referred to locally as "Buko Juice". 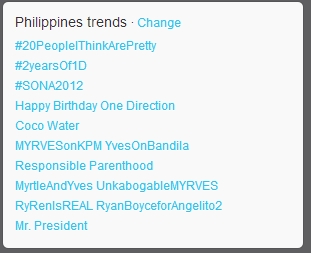