The Internet is Abuzz at Dolphy's Death - RIP Dolphy

By Admin July 10, 2012
Philippine Entertainment industry King of Comedy Dolphy is dead at 83! This is after months of being confined to the hospital. And his death sends shockwave of internet buzz primarily through social networks like Twitter and Facebook.

As of the time of writing this article, the topic "RIP Dolphy" is trending on Twitter Worldwide (see screenshot below). 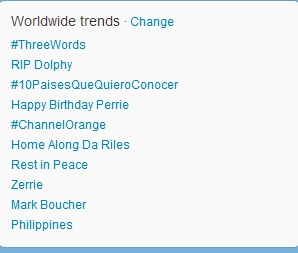 Dolphy (Rodolfo Vera Quizon, Sr.) has been one of the prolific actors in the Philippine cinema starring in hundreds of films and gaining numerous awards from several award-giving bodies.


Surprised by his death?
To some people, his death might be surprising due to early reports that his condition continues to improve. For instance, in an article publish at abs-cbnnews.com last Sunday, July 8, 2012, the doctors claimed that the veteran actor responds favorably in his pneumonia treatments.