By Admin February 12, 2010
Google’s latest service, the Google Buzz finally reached my account a day after its big announcement. Actually, on the day of announcement I’ve been hitting the F5 key on my keyboard several times even though I was well aware that Buzz will not reach all Gmail accounts for a few days after the announcement date.


And, finally yesterday, when I opened my Gmail, this message appears on my browser: 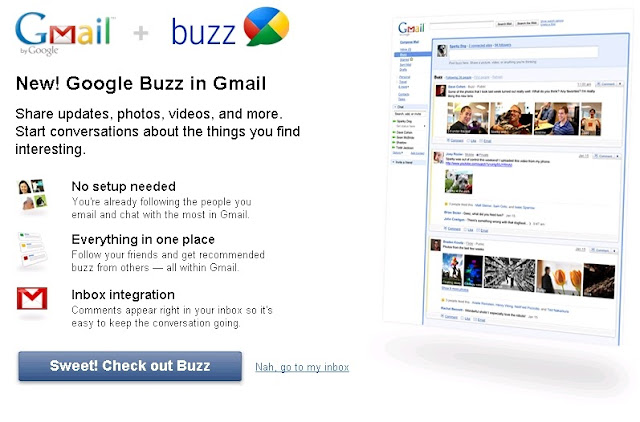 At last, I’m in to the hottest buzz in town, the Google Buzz. After several clicks, I managed to follow my some of my email contacts. I even connected my Google Buzz to automatically fetch updates on my Twitter, Flickr and Blogger accounts. Wow!

Many analysts criticized Google as being late in the rapidly growing Social Networking industry. In my opinion, Google might’ve been late but it doesn’t mean they cannot keep up with the leading social networks such as Twitter and Facebook. Though being the first gives you significant advantage, it doesn’t always guarantee that you are winning the competition. And if you come to think of it, neither Facebook nor Twitter is first on Social Networking. Friendster is even earlier but look at it now? Its popularity is continuously being eroded by the likes Facebook and Twitter. Quality is the real measure of success. In Social Networks industry though, quality service means a few steps higher. You have to reach the heart and minds of your customers—the web surfers.

Facebook thrives on its attractive applications. Twitter on the other hand saves you lots of time by being able to communicate your less-than-140-words thought in real time. Google Buzz promises a much clearer message among the many noise brought about by the explosion of Social Networks in the web.

How about you? Will you join the latest Buzz?