By Admin August 14, 2012
Interaksyon.com first broke the news about the video where a man was seen assaulting a seemingly helpless MMDA traffic enforcer. According to the report, TV 5 producers was incidentally in a car next to the scene. The camera was inside the car but the voices from outside can still be heard. Immediately after posting the video on YouTube, the words MMDA and the man's name quickly trends on twitter. The tweets shows sympathy to the humiliated enforcer and anger to the man.In YouTube, similar comments can also be found, most of which are seeking for justice. 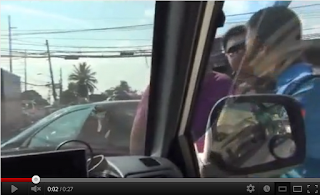 The man is identified as Mr. Blair Carabuena working as a human resources officer in a tobacco company: According to interaksyon.com, Blair refused to give statements regarding the event. Meanwhile, the enforcer was identified as T/C Mr. Saturnino Fabros. Based on the their latest tweet, MMDA Legal is filing a case against the Mr. Blair tomorrow.

A Warning to Everyone
Social media has become so powerful nowadays. Sadly though, it can be used for both good and bad purposes. For instance, during the floods last week, Marian Tan trends on twitter. Rage poured out against her for her alleged statements against the Philippines and her fellow Filipinos. But eventually, it was discovered that a fake account pretending to be her was used to destroy her name. Too late, her name has been cursed in every possible way before the truth surfaced. A sad case of cyber bullying.

Well, in this case, it can be different. As I see the helpless MMDA enforcer verbally and physically humiliated by a proud (seems) man, my blood boils as my sense of justice clamor for punishment against the man who did that. I can't blame the twitter citizens for voicing out their own rage against the man. But we always have to be careful when doing so. We have to assess if we know enough information before we say anything in the public cyberspace. If we're not careful, we will be part of online bullies, of which the number is growing.

This is also a warning to everyone who wants to do anything bad to someone. The days when you can freely assault somebody weaker than you is over. With cheap cameras already in the hands of ordinary people, it is too easy to capture a photo or a video of you doing your bad acts. And with the right timing, you can be an instant online celebrity of hatred.