By Admin July 03, 2013
I've been to Bohol many times before. I had visited Tagbilaran thrice and at one time stayed there for a week in a friend's house. I also had experienced four day-tours, visiting popular places such as Sagbayan Peak, Chocolate Hills, Tarsiers forest, Loboc Floating Restaurant and many others. I have also slept in a friend's house in Panglao Island and saw the beauty of Alona Beach. 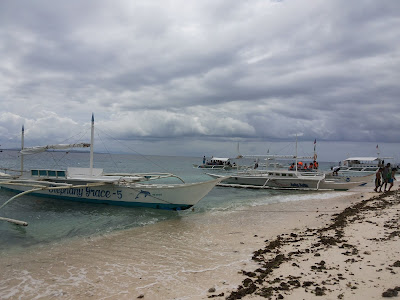 With all these experiences, I was convinced that Bohol is indeed a very beautiful place. Then, I thought I already saw the entire beauty of that province. I was wrong. My last visit to Bohol just a couple of days ago in which I embarked in a one-day island hopping taught me that there's more to this place than I used to think of. Here's the story.

I and three friends woke up early Sunday morning in Tagbilaran. We arrived a day earlier for a special mission. The mission was a success and as a treat for ourselves, we decided to go sight-seeing.

At 5:30 in the morning, we left Tagbilaran and head to the other side of Panglao island where we can rent a boat for island hopping. It was a fun and exciting one-hour motorcycle ride. The roads were good and there's just few vehicles passing by. Thanks to the generosity of our local friends who gave us the free ride.

When we arrive at the place, we saw many tourists waiting for their turn to ride a boat. But moments later,  four coast guard officials in their uniform approached the docking area. They warned the tourists that because of the Monsoon winds, the sea is restless with huge waves that can destroy small boats. They advised all of us to cancel our tours. We are disappointed.


We almost decided to cancel the trip but our boatmen suggested to try and just turn back if the waves were big indeed. With that, we decided to proceed. And after a few minutes, we are riding a small boat about 6 to 8 meters long. We wore our life vests just in case any trouble happens.

We want to to go directly to Balicasag island where the dolphins and fish sanctuary are but along the way, we noticed that most boats have parked in Virgin island, a small island located just a few kilometers from Panglao coast. In a normal tour, the Virgin island is supposed to be the last destination before coming back to Panglao.

After asking other stranded tourists, we found out that the coast guard forbids the small boats from going beyond Virgin Island. Our boatmen said that the penalty is expensive and the ship will also be grounded for a day if they violate the command. With that, we decided to stay in the island while we observe if the weather improves later.

Half an hour later, we decided to proceed because we felt that the wind calmed down. Later, we arrived in the deep portion of the sea separating the Balicasag and Virgin islands. And before long we realized that our boat is already dancing in big waves. The waves are big enough to capsize our boat so we decided to turn back. And we turned back indeed with disappointment. No Balicasag island, no dolphin show, no fish sanctuary. Nothing. This is really a bad timing trip.

We decided to find a spot instead where we'll could just swim. That's the least thing we could do then. Maybe we could find an area where there are fishes too. 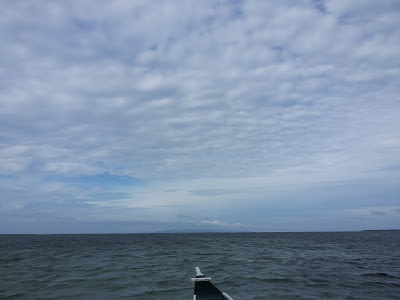 So we settled near the coast of Virgin island. It was fun at first. But after half an hour, boredom sets in. Thankfully, there's something that is about to happen that will entertain us.

While my friends are busy swimming, I noticed a small boat approaching us. The riders turned out to be two Badjau men selling pearls and other stuffs from Zamboanga. Badjaus were indigenous people in the Sulu, South Philippines.

For about an hour, they tried to sell stuffs to us. And we end up buying some items from them. It was fun though.

After buying stuffs from our unexpected visitor, we noticed that the weather is better. The sun is already out of the clouds. So, for the last time, we decided to go to Balicasag island.

The waves are smaller this time. We managed to get through and arrived in the island past 10 o'clock. Though no more dolphins at that time, we are still excited for the fish sanctuary. We didn't waste any time. We rented a smaller boat and snorkels.


It was a fantastic experience indeed. I never thought that I would experience the beautiful scenes in books and videos depicting the underwater scenery. We took picture of the fishes, turtle, corals and ourselves underwater. Below are some of them.


The feeling is unique. It was far different than just seeing it in photographs and videos. In this, you will feel the waters. The fishes will sometimes touch your hands as you feed them with small bits of bread. They were alive swimming, gliding in the deep waters. 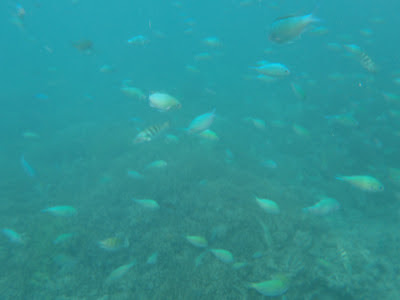 This is indeed the most enjoyable part of the trip.

We took a lunch in the island and went back to the Tagbilaran at around 1 o'clock in the afternoon. Later that day, we came back home bringing all the memories and images of the wonderful natural beauty of Bohol.

By Admin January 11, 2018
It's a brand new year for everyone, including local scammers. And despite all the efforts by PLDT and Globe Telecom to curb text message scammers, from time to time, they still creep out and show up in our inboxes. And as hard to believe as the messages of winning some great amounts of money is the fact that there are still people who believe them. I personally know someone and that scam text message triggered events that turn her life upside down. So my point is, we still need to be careful regarding these scam messages. The danger is real! So without further ado, here's the scam message I received a few days ago. On Sunday, January 7, 2018 at exactly 3:33PM (PH time), I received this message from a certain Atty. Jhon Acosta with phone number 09552962911 Congratulations! Ursim# Hadwon PHP850,000 From(GMA KAPUSO FOUNDATION) To Claim Send Ur (NAME/ADD/AGE) &Call Me Now Im Atty;JHON ACOSTA DTI#0391s2018 Thankyou,  Do Not Ever Reply Obviously, this is a
140 comments
Read more