By Admin February 01, 2013
Budget carrier AirAsia Philippines announces the suspension of their Clark to Kota Kinabalu route effective February 1, 2013. In their press release, the low-cost airline cited the the company's plan to realign its business and strengthen operations in core markets for 2013 as the reason for the take down. Clark - Kota Kinabalu is the latest route suspended by AirAsia. Last December 1, 2012, they stopped their Clark-Macau and Clark - Puerto Princesa routes.

Similarly, passengers who have connecting flights on AirAsia or AirAsia X will be offered any one of the following options:

Except for PAL, all the airlines operates in a low-cost model, offering cheap promo fares to attract more flyers. Cebu Pacific became very successful in this model, surpassing the long time leader PAL as the largest airline company in the country. Others followed Cebu Pacific's steps. Airphil Express re-branded from Air Philippines to become a low-cost airline. They saw a relative success but also saw increase in competition. Couple that with increase in fuel prices, these factors drives airline profits down.

AirAsia Philippines is an affiliate of AirAsia, a Malaysian-based airline company and is the largest low-cost airline in Asia. They began their operation in the country last March 2012 in their main hub at Clark International Airport, in Clark Freeport Zone, Angeles City, Pampanga. They currently serve two domestic and three international destinations namely Kuala Lumpur, Hong Kong, Singapore, Davao, and Kalibo. 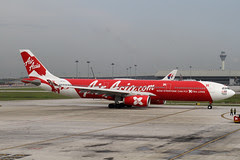 By Admin January 11, 2018
It's a brand new year for everyone, including local scammers. And despite all the efforts by PLDT and Globe Telecom to curb text message scammers, from time to time, they still creep out and show up in our inboxes. And as hard to believe as the messages of winning some great amounts of money is the fact that there are still people who believe them. I personally know someone and that scam text message triggered events that turn her life upside down. So my point is, we still need to be careful regarding these scam messages. The danger is real! So without further ado, here's the scam message I received a few days ago. On Sunday, January 7, 2018 at exactly 3:33PM (PH time), I received this message from a certain Atty. Jhon Acosta with phone number 09552962911 Congratulations! Ursim# Hadwon PHP850,000 From(GMA KAPUSO FOUNDATION) To Claim Send Ur (NAME/ADD/AGE) &Call Me Now Im Atty;JHON ACOSTA DTI#0391s2018 Thankyou,  Do Not Ever Reply Obviously, this is a
141 comments
Read more