AVATAR: On its Fifth Week on Top! 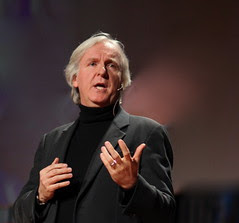 James Cameron. Image by jurvetson via Flickr
The revolutionary 3D film by James Cameron, Avatar, is still on top of the US box office and shows no sign of slowing down. Avatar garnered a record breaking of 41.3 million dollars of earnings on its fifth week even surpassing the newly released “Book of Eli”. It already accumulated 492 Million dollars on US box office knocking Star Wars on the third highest grossing film in the United States. Worldwide, the film already reach more than 1.6 billion dollars and many people predicts that two weeks more, it will overtake Titanic (1.85 Billion) as the world highest grossing film of all time.

Favorite of People as Well as Critics

Amid the praises and awards it received, the film also received various criticisms. The Vatican accused the film of “neo-paganism” arguing that the film “gets bogged down by a spiritualism linked to the worship of nature.” Some groups also accused that the film has a “racist plot” and that it supports the notion of “white messiah”—that the white people always saves the day of the primitives.

A group of campaigning against smoking is also criticizing the character of Sigourney Weaver in the film. Waever plays the role of Dr. Grace Augustine, a scientist and head of the Avatar program. The first scenes of Weaver in Avatar show her looking for her cigarette after waking up from her Avatar. The group argued that the smoke scene generates millions of tobacco impressions in cinemas around the world. Cameron answered this by saying that though it’s ideal that the characters in the film should be role models, but he wants the movie to reflect “reality”.

Titanic, the 1997 blockbuster directed by James Cameron himself, and currently the highest grossing film of all time received a historical 11 wins out 14 Oscar nominations. How about Avatar? Will it outperform Titanic’s record? Let’s all see when the winners are finally revealed.