By Admin January 19, 2010
The hackers attacked again! This time though, not on a government owned website, but in a commercial one. CD-R king, one of the Philippines most popular retailer of computer and electronic accessories, was target of the latest attack.

Their “new products” webpage was defaced by the hackers. All the names of their new product offerings were replaced by the words “Hacked by Fending”. Below is the image of the defaced CD-R King website. 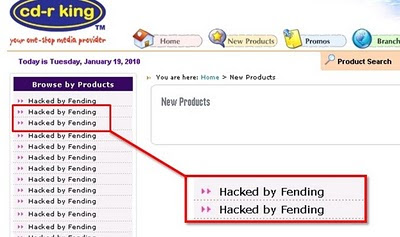 This attack just one among the series of hacker attacks targeted on Philippine websites. Late last year and early January, 2010, a number of government websites were also defaced by hacker groups. TESDA, DOH, DOLE and NDCCs websites were among them.

Last week, Google expressed their denunciation of what they described as “highly sophisticated” targeted attack on their corporate infrastructure which leads to intellectual property theft. Though Google doesn’t directly accused the Chinese government as being the one behind the attack, the company said the attacks came from China and are targeted to “human rights”
activists’ Gmail accounts.

These events pose a serious question on our awareness regarding the threats on the internet. How many people who have PCs have updated antivirus software? How many people even know the importance of antivirus software? Do you know security terms such as identity theft? How about phishing? The best technique to survive an attack is to know how the bad guys attack. Information is the best tool we can use against cyber crime.